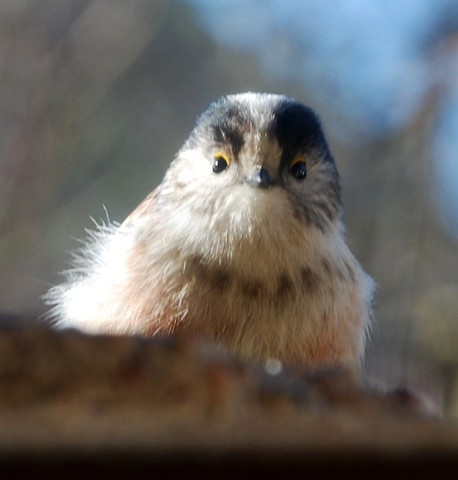 I’ve already spoken a fair bit about Long-Tailed Tits here and there on my websites, but I added these two pictures (taken in daylight this time) to compliment the two night-time shots below. It wont be long however, before all the little flocks of Bumbarrels will be separating into pairs and disappearing from our gardens back into the countryside in order to build their extraordinary flask-shaped nests so beautifully constructed as they always are of moss, lichen and spider’s silk and in which they lay as many as a dozen eggs.

Now, I’ve always had a bee in my bonnet about injustice and, in particular, the rapidly increasing number of profoundly ignorant and terminally self-centred morons amongst us who repeatedly insist on mistreating or riding roughshod over anyone or anything weaker than they or less able to stick up for themselves. I’ve always been like it, but unfortunately, this has led to a great many confrontations over the years, the most recent example taking place yesterday, 30th March, when I insisted that a youngish, perfectly able-bodied couple remove their 4x4 from a parking space exclusively designated for the disabled. Obviously, they didn’t like being told by some grumpy old git what they could or couldn’t do and an argument subsequently ensued. The guy moved his vehicle in the end mind you, but only when it became clear that I was prepared to follow them around wherever they went and draw attention to their (typical for these days) total lack of consideration for those less fortunate than themselves in a very loud voice.

Sooner or later no doubt, I’ll probably be doing something even more suicidal, such as tipping the litter dropped by some dribbling idiot parked in his car in a lay-by somewhere back into his lap via his still open window (as happened last summer) and the guy will simply reach across to his glove compartment, take out a 9mm and pop a peaked hat of some description into my apologetic bottom (is that what they say? I think that’s what they say)!

Anyway, I might add more about yesterday’s little fracas on the current diary page of the .com site, but meanwhile, all this unpleasantness reminds me of another occasion fifty years ago when I was about ten years old and I happened across two bigger and older boys in the process of destroying a Long-Tailed Tit’s nest, but not before first removing an egg each for their own bird’s-egg collections (a very common practice as late as the 1950s) and then smashing the rest!

Not surprisingly (and especially when you consider my previous record of stabbing my Uncle Jack in the leg with a kitchen knife because he punched my Aunt Emma in the face or the time I shot a local fruit farmer in the backside with an air-gun for paying local kids 3d a bucket for any Bullfinches they managed to kill or when I whacked Phil Wotsisname on the side of his knee as hard as I could with a rounders bat for throwing stones at birds), the red-mist descended almost instantly and I flew at both boys in an uncontrollable rage with arms and legs flailing in all directions. The end result of course was that I received a very sound and thoroughly memorable beating, irrespective of how much I believed myself to be in the right at the time! Finally, they took it in turns to spit on me repeatedly as I lay there in the long grass, battered and bruised, my face bloodied and one of my fingers broken, the self-same finger in fact, that I distinctly remember to this day one of them grabbing hold of and bending back as far as it would go….and then bending it back a whole load more just to see what would happen!

Incidentally, I did eventually get my own back on both of them a couple of years later, but that’s another story and one of which I am most definitely not proud. Thankfully though, the hot-blooded red-mist tendencies gradually declined as I grew older, but only to be replaced eventually by far more worrying bouts of military-related, ice-cold, PTSD-induced behavioural problems that always leave me shaking uncontrollably, but over which I am gradually achieving a greater and greater degree of control. Plus, I’m no longer doing such things as visiting various degrees of violence upon groups of louts who use live, rolled-up hedgehogs as footballs for example (that was serious doggy doo-doos at the time) or repeatedly pouring paint-stripper over the roof of the new Mercedes belonging to the stonemason who fiddled my Mum out of more than £400 when she confessed to losing the receipt and he suddenly denied that she’d ever given him the cash up-front for a dedicated gravestone for my Dad’s grave shortly after he died in the mid 1980s!

Please note at this point however, that I most definitely DO NOT consider myself to be some kind of self-assigned vigilante-type tough guy, but rather a profoundly screwed-up ex-trooper with deep on-going psychological issues that I’m at last beginning to get a handle on, if only because of the continued and unwavering support I get from my immediate family and a small handful of very loyal friends….though possibly also a little bit because of the almost twelve years of weekly psycho-therapy sessions I was fortunate enough to be given from 1993 to 2005.

Such “episodes” from my past, as well as my continued, seemingly uncontrollable tendency to confront people who think they can do what they like, when they like to whoever they like, are why the Boss is still so keen for me to have a working partner and why Macca was with me yesterday (as it happened), even though he was sitting in his own vehicle situated across the car park, photographing the entire incident (just in case) and generally finding the whole thing bly hilarious….the B*rd!).