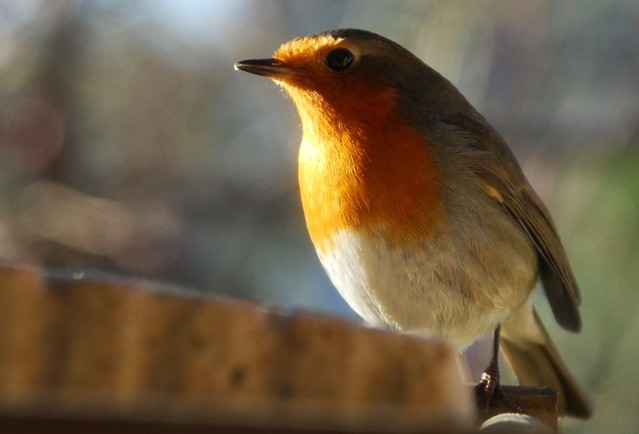 This little sweety-pie showed up in my garden just a couple of weeks ago and is already very tame. In fact, I was able to take these pictures from no more than a metre away as I topped up the bird-feeders this morning (19th December). Meanwhile, I have a sneaking suspicion that she might be one of White-Eye’s offspring from last summer because you only have to watch her for a few moments with White-Eye around to realise that she’s still very much daddy’s little girl. As for calling her Holly….Well, it’s Christmas and my wife thought it was an appropriate name.Sadly, I haven’t seen Uppity Bill since the early summer and I know for a fact that Blink was killed by the neighbour’s cat in July because I found him myself on the front lawn. The elderly DT also went missing around that time and I’m finally convinced that both Thelma and Louise have also climbed the rainbow staircase to the great big aviary in the sky. I’m pleased to be able to report however, that Two-Tone is still very much in evidence, but worried that Scraps the one-legged Chaffinch has been missing for about four months now. Oh well, these things are bound to happen sooner or later, so it’s nice to have a brand-new character hopping in and out of the garden all of a sudden to brighten the cold winter days.