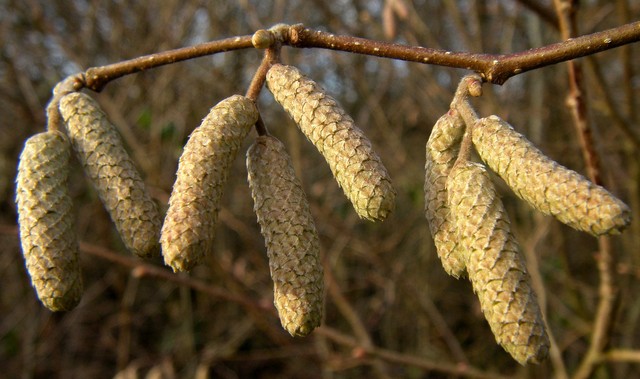 The poor old Alder tree was, for centuries, considered to be the embodiment of evil, playing host to the malignant spirit of the much-feared Alder king, King Erlkonig (more commonly known in popular literature these days as the Elf King). I should imagine though that this was a legend simply born out of the fact that when you cut into the wood of the Alder tree with a knife, it goes a deep orangey-red colour rather as if it’s bleeding (the wood that is, not the knife), a feature particularly noticeable when it gets wet.

On the other hand, Alder wood turns a far more socially acceptable yellowy colour when it’s seasoned and was commonly used in the old days for making broom handles. I remember how, when I was a boy, genuine Gypsy women would come knocking at the door in some of the more rural areas, armed with baskets of clothes pegs for sale. These usually comprised of two crudely shaped pieces of Hazel wood bound together at one end with either strips of tin or leather or short lengths of wire (the latter probably obtained from the local farmer’s barbed-wire fence). The Gypsy women would always have other things for sale as well, such as Alderwood clogs or bunches of “lucky” heather,  but if you offered to buy at least a dozen clothes pegs for a penny each, then the Gypsy you bought them from would usually be prepared to return your generosity by placing a curse (at your request) on any badly behaved children in the neighbourhood (more effective than any poxy modern-day ASBO believe me)!

Anyway, there was one boy in particular when I was about seven years old, who delighted in making my life a misery at primary school and one day, when a Gypsy woman came to my Gran’s door selling clothes pegs made from Hazel and clogs made from Alderwood, I begged my Gran to give me a small advance on the money I earned by tending to the daily needs of her many and various farm animals and rushed to purchase twelve clothes pegs. I then asked the Gypsy woman if she wouldn’t mind placing a curse on my tormentor and she promised that she would. Whether she actually did or not I shall never know, but before the month was out, both myself and the boy I’d requested be cursed had been struck down by the dreaded whooping cough! Worryingly affected by what was a serious illness in those days, I was extremely poorly and kept away from school for weeks on end, but I survived, thanks mostly (I’m convinced) to the ministrations of my herbalist Grandmother who provided me with all kinds of herbal-based concoctions and decoctions, as well as weekly blood-letting sessions involving very large and unpleasant-looking medicinal leeches. Sadly however, the other boy died despite eventually being admitted into hospital and the guilt I felt over his demise was something that lay heavy on my shoulders for years afterwards. In fact, even now I can’t help feeling that I was considerably to blame!

Silly to feel that way? Probably. Just a coincidence? Almost certainly, but it’s always there in the darker recesses of my mind and I’ve never been entirely able to rid myself of feeling at least some degree of responsibility….even though I obviously didn’t want him dead, but rather for him to possibly grow huge, hairy and embarrassing warts all over his face….or just maybe for his dick to shrivel up and drop off!

As for the evil old Alder tree, I bought my Mum a pair of the Gypsy’s Alder-wood clogs a few days later for 3/6d (quite a lot in those days and all the money I had in the world at the time), so maybe King Erlkonig had something to do with it as well! The clogs meanwhile, were meant as a present for Mum’s birthday, but they turned out to be way too small. She always treasured them though and I decided to keep them after she died in 2003 and still have them tucked away in a cupboard somewhere to this day.