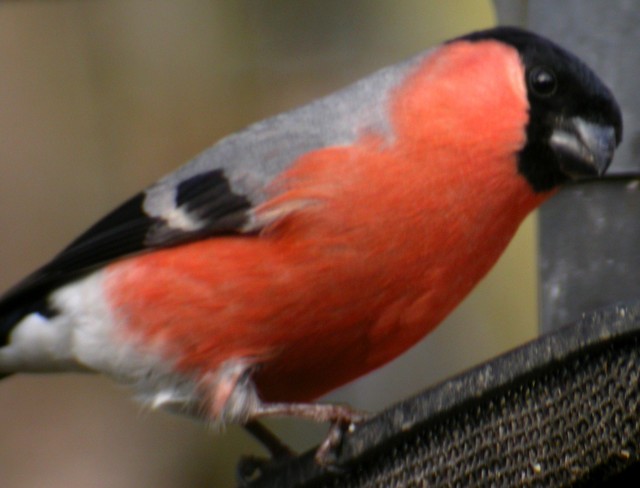 My absolute favouritist British bird, but once hunted almost to extinction mostly by fruit farmers throughout the 1950s and 1960s simply because it once numbered in its millions across the UK and hundreds at a time would descend upon fruit orchards each spring and devour huge percentages of the trees' fruit buds. Then they continued to decline even more drastically during the 1970s and 1980s due to the excessive and badly thought-out applications of intensive farming methods. Sadly, for years we (the UKNR) have been lucky if we’ve each been able to record more than one or two sightings a day. More recently however, we’ve been noticing that their numbers appear to be stabilising in certain locations, while in others, such as here in the Cotswolds, there are even signs of a limited recovery. We continue therefore, to use them, as we do the Yellowhammer and Corn Bunting, as a primary keystone species for data-gathering purposes and make a note of the total numbers seen and the exact locations of all sightings.

Meanwhile, I’ve always been delighted that a few individuals have periodically chosen to visit the bird-feeders in my garden (particularly those containing black sunflower seeds which have always been a firm favourite), but since the summer of 2009, I have been aware of several different individuals making far more frequent visits and now it would appear that a pair (the male of which is pictured above) are territorially established in the large wooded area at the end of my garden and will, hopefully, choose to breed there later in the spring.

…Except that certain so-called environmental “experts” (otherwise known as environmental tw*ts) at both the Highways Agency and Cotswold County Council have decided (in their infinite ignorance of how the Natural World actually works in terms of balance and connections) to cut down and remove all the trees deemed to have died in the afore-mentioned woodlet, as well as clear out all the undergrowth which, in turn, will see an immediate end to any chance at all of Bullfinches nesting there, not to mention the two pairs of Great Spotted Woodpeckers, the Nuthatches and the Tree-Creepers to name but a few! Gone too, will be sufficient trees to host the flocks of winter Twite so often interspersed with the occasional Yellowhammers and Linnets….and the bushes so heavily laden in the autumn with the berries that never fail to attract scores of Fieldfare and Redwing or even the odd itinerant flock of Waxwing. The Corvids love it there too and I’ve often glanced up to see the odd Raven or two staring down at me from the treetops. Swallows, Swifts and Housemartins as well as three species of Bat are attracted to the myriad variety of flying insects that originate from the very undergrowth the “Idiot Brigade” plan so enthusiastically to tear out, while the very successful bat-boxes and nest-boxes I’ve climbed several trees to install at my own expense will, presumably, also be removed!

Oh well, that’s progress for you I guess, but at least we’ll have a much clearer view of the main road once the woodlet has been relieved of around 40% of its trees as well as all the climbing-type vines and every single smaller tree and shrub insolent enough to grow there. It will, I’m sure, look very neat and tidy….Plus, we’ll be able to hear the traffic pass along the main road beyond much more clearly as we sit in our garden of a summer evening, especially once all that ugly, seemingly pointless greenery has been removed! Mmm….Perhaps I should just join in by tearing up my beloved wildflower beds, filling in the wildlife pond and cutting down all my own trees and shrubs. Oh….and then I could dispose of all those stupid bird-feeders and cover my entire garden with decking, paving slabs and gravel like the rest of the bl**dy country and be done with it!

Anyway, as I’ve probably mentioned a couple of times previously, it was more than fifty years ago that Bullfinches got me into so much trouble with the police after I shot a farmer in the backside with an air-rifle for paying local kids thrupence (about £1.00 in new money) a bucket to kill as many of the pesky birds as possible and, believe me, it takes an awful lot of Bullfinches to fill an old-style galvanised bucket!

A Beautiful and Obviously Healthy Animal Just Butchered by Complete Morons Who Have Absolutely No Understanding of the Balance of Things in the Wild An Old Crumbling Cotswold Stone Wall What Evil Lurks Within Thee Child....?