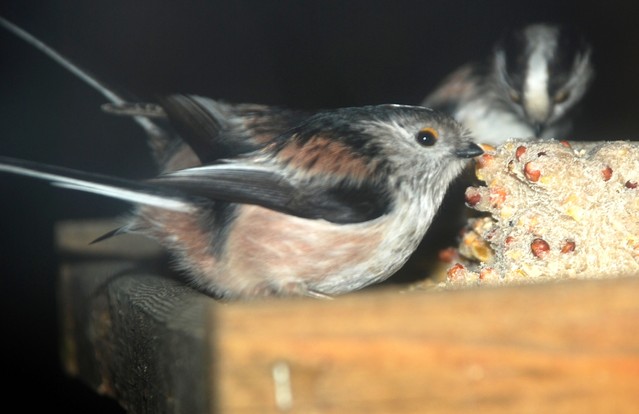 (First Effort, but Possibly with the Camera Positioned a Little Too Close to the Bird-Table)

The Sparrow Terrace-type set of nest-boxes that I put up under the lower eaves at the front of the house a couple of years ago soon proved to be an enormous success….if only with the Blue Tits. In fact, most, if not all, of the nesting compartments have been occupied by several different pairs of the feisty blue and yellow reprobates throughout each breeding season.  Interestingly, I have also counted as many as fourteen Blue Tits shortly before dawn in the depths of winter leaving a single compartment of the same terrace where they must have decided to roost communally during the coldest of the cold nights, presumably huddling together for warmth in one great big ball of beaks, tails and feathers.However, the heavy snow and desperately cold weather of the past few weeks has resulted in one small flock of local Long-Tailed Tits doing exactly the same thing. Very much a communal species anyway, small, straggly and probably family-orientated groups of LTTs have been drawn to the bird-feeders in my garden for almost two decades, showing a particular preference for the peanuts, sunflower hearts and suet blocks, but I’ve never known them to roost in any of my garden nest-boxes before….although I am aware that such behaviour is not uncommon elsewhere. Still, it’s always a delight to see them arrive, whether they’ve intended roosting in the boxes or not and I’ve been fascinated by their overly neurotic little antics since I was a boy way back in the 1950s, a time when LTTs were, by and large, very rarely seen in gardens at all.

Yes, I’m perfectly aware of how dull all this must seem to people with “proper” lives to lead, but one brand-new piece of LTT behaviour of which I was previously completely unaware has made itself manifestly clear to me over the last couple of days….or rather, the last couple of nights….

The thing is, we don’t have the downstairs TV switched on very much these days for the simple reason that I do all my paperwork of an evening or need to read work-related books, documents and stuff and generally prefer to while away the evening hours chatting to various members of my family about Life, the Universe or anything in-between or maybe by watching a proper, decent film or two which I’ve previously rented from Lovefilm.com on DVD. Sadly (and perfectly understandably I guess), my wife and daughter (who both positively exude normal-ness) would much rather watch their beloved soaps and assorted dramas et al on the sets upstairs than spend all evening listening to my constant, moany little comments about how TV isn’t what it used to be or how the relentless dumbing-down of British broadcasting in general and the brain-numbing impact of reality TV in particular has totally undermined the very fabric of modern British society!

Anyway, the point is that because the TV hasn’t been on much beyond tea-time, the Simpsons and the evening news, I’ve been aware of very faint scritchy-scratchy scraping noises coming from just outside the living-room window roughly between 2200hrs and midnight. Suspecting therefore, that something (probably a rat) was somehow managing to access the free-hanging bird-table situated just below the Sparrow terrace, I was determined to catch the culprit in the act, so I decided to set up one of my cameras connected to the new stealth PIR trip-shutter and flash thingy….and, hey presto, here are the results….

Amazingly (though perhaps not when you consider how scarce food must have been for almost all wild birds of late), the camera managed to snap what I assume are members of the self-same posse of Long-Tailed Tits currently roosting in the Sparrow Terrace and who must be doing the bird-world equivalent of me sneaking into the kitchen in the middle of the night to raid the fridge!

More interesting still was the fact that these normally excessively vocal little birds were all as silent as the night….I guess it’s all about adapting to overcome.