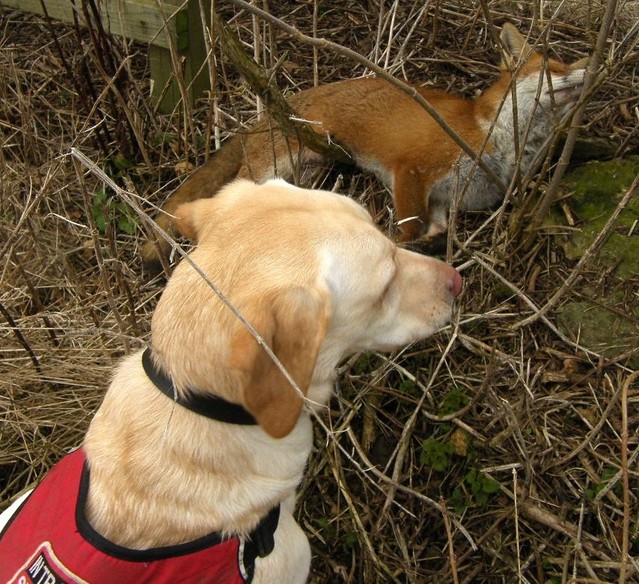 At this point, she became even more agitated and kept jumping up at me and even barked a couple of times. Then I saw the Fox lying under the hedge. It was motionless, but I told Tess to sit and stay while I checked it out because it looked as though it might still be alive. Sadly, however, it had died only shortly before we arrived on the scene. The body was still fairly warm and flexible, while the tongue was still moist and the eyes only slightly glazed.

The cause of death wasn’t immediately apparent until I rolled the unfortunate animal over and discovered that it had been blasted with a shotgun probably from a distance of about twenty or thirty yards. The wounds to its left side and flank were extensive and death had probably been caused by a combination of blood loss and shock. Now, I fully understand the necessity for a steady, measured culling of sick, diseased and possibly very elderly Foxes in rural areas in order to maintain a healthier population overall (something desperately needed with regard to their urban cousins, few of which reach even two years of age because of sickness or disease compared to the seven years average of Foxes out in the open countryside). However, the job should always be done by a skilled marksman using an appropriate firearm and ammunition fit for purpose. I’m totally against either hunting with hounds, trapping, snaring or poisoning, while the use of a twelve-bore shotgun to despatch what was obviously a perfectly healthy animal smacks of cretinism beyond the pale. Whoever did this is an idiot of gargantuan proportions, if only because this animal was probably shot the previous evening, whereupon it dragged itself at least half a mile in what must have been absolute agony before finally crawling into the hedgerow where it lay frightened and confused until it died just minutes before Tess led me to it.

There are some sick, evil b*stards in this world and finding things like this is, for me at least, very upsetting. Nonetheless, I was really pleased with the way that Tess, not only picked up the scent initially, but then reacted positively by leading me to the stricken animal in less than half an hour from the outset. After all, she might easily lead me to a similarly injured animal next time and I’ll actually be able to help it. Tess is a life-saver, not a life-taker and I know that she found this incident.