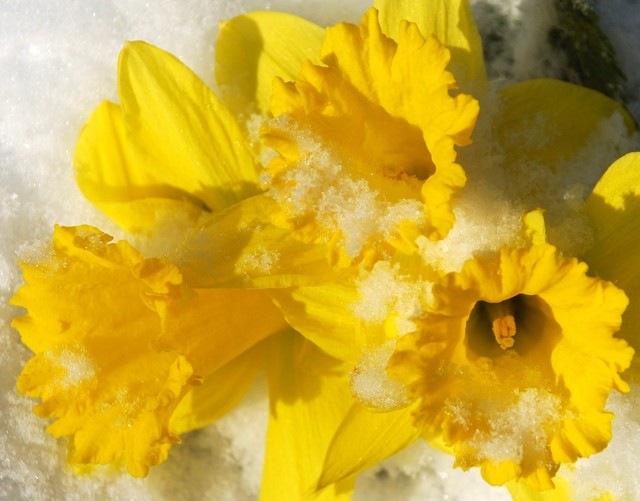 Normally, by this time of the year, our parks. gardens and roadside verges are ablaze with the yellow of countless Daffodils, but all the snow of late has held them back and these are the only ones that I’ve actually seen in bloom so far. They were growing on a south-facing grass embankment in Wiltshire, but even these have been taken by surprise by more snow that fell overnight and throughout this morning (19th February).

All we need now though, is a couple of days of bright sunshine and all the Daffodils will come out at the same time, along with all the Crocuses and Primroses. The Snowdrops are with us already because they’re tough little blighters and a few Celandines too, but it’s the lack of colour around us at the moment and not just the cold that makes it feel as though winter is still very much with us.

Barely an hour into our day and Tess suddenly picked up on a scent that seemed to make her very agitated. I allowed her to follow it for a while, but then decided to turn back on our tracks when I realized she was actually following a trail made up of the paw prints and the occasional blood splatter of a wounded Fox leading back in the direction from which we’d come. We began to backtrack therefore and continued following the scent in the opposite direction for more than twenty minutes until Tess finally led me to a particular hedgerow growing along one side of a large field.