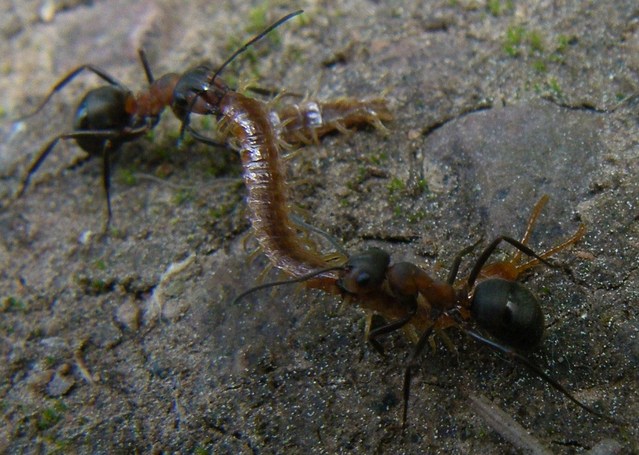 An extraordinary little drama played itself out in front of my eyes in the middle of a Gloucestershire woodland yesterday (20th May, 2010). Maddy was with me and I called her across to bear witness to the event…. It was a very warm, but very humid day (more like a day in late July in fact, than one in late Spring). Wood Ants were everywhere, going about their business in that very determined way that they always seem to display. Then I happened to glance down at the ground and noticed the two workers in the picture above struggling to control a very energetic and desperate Centipede that the ants had obviously only just caught. They both had a very firm grip, but the Centipede was strong and the ants were struggling to control it, let alone managing to transport it however far it was to their nest.

Suddenly, they paused and, gripping the creature tightly in their massive jaws, proceeded to stretch it out as far as they could. At this point and just as if it was responding directly to a call for help (which it probably was), a veritable giant of a soldier ant (larger than the two workers put together) appeared out of nowhere, walked up to the stretched-out Centipede and with a single bite of its massive jaws, bit the stricken anthropod cleanly in half, whereupon each worker was subsequently able to proceed relatively unhindered by the now severed halves of their victim.

Maddy, I was pleased to notice, was absolutely enthralled by what she’d seen and both the the speed and the efficiency of the ant teamwork employed. She asked me if we could take the time to find the nest and I told her to follow any ant laden with what appeared to be food and simply follow it. Sooner or later it would lead her to the nest. About fifteen minutes later, I heard her call from some distance away and I immediately sent Tess ahead to check if she was ok. She was and with a distinct look of triumph on her face….She’d found the nest all right, more than thirty paces into dense woodland from where she’d begun to follow Anthony (as she’d decided to name the “female” ant she’d finally chosen to stalk) and who had carried a dead Orange-Tip Butterfly all that way, possibly after she’d immobilised it herself or, more likely, after a soldier ant had done it for her.

At this point I entered “lecture” mode and, as Maddy’s eyes slowly began to glaze over, I passed on most of what I know about good old belligerent Formica rufa….Most surprising of which, as far as Maddy was concerned is the fact that they are actually a protected species in many countries….not because they are in any way endangered (they’re massively prolific in fact), but because they manage to reduce woodland and forest pests on an almost industrial scale. Thus, they are truly considered to be the ultimate forester’s friend.